Within the complex current situation of Al-Manshiya Square, lie a lot of opportunities. The square is one of the most lively and most vibrant public spaces in downtown Alexandria. It is also, historically, a space that has witnessed Egypt’s modern history and has been the backdrop to many of the seminal key moments that changed Egypt. The square is also strategically positioned within the commercial district of the city’s downtown area, to accommodate the needs of a large segment of Alexandrians. It has for years been widely known as the destination for commercial activity. The buildings surrounding the square range between commercial, residential, and administrative use. It is also carefully positioned within the city’s public transport network, and is well connected to all major zones of the city.

The revitalization and upgrading of Al-Manshiya square, as well as proposing ideas for the Motaheda parking plot is a unique challenge. The square itself has grown out of control and street vendors have taken over large areas of public spaces and streets which causes a lot of connectivity problems within the existing surroundings. 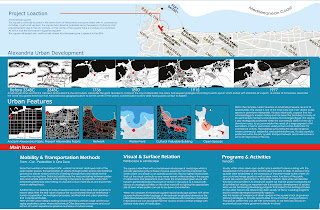 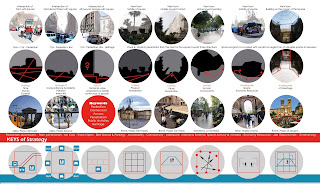 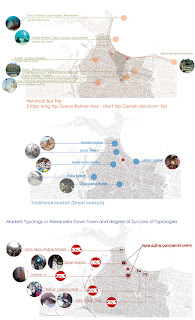 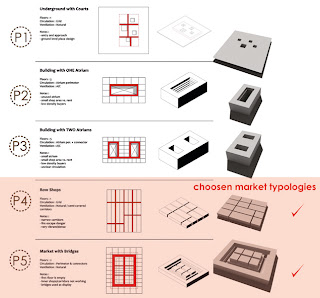 The projects proposes a new downtown district that consists of three major nodes, where each node acts as an attraction point and where all three nodes work in harmony in providing a diverse downtown experience. 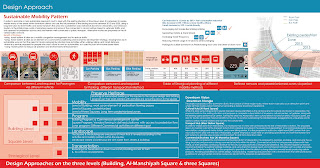 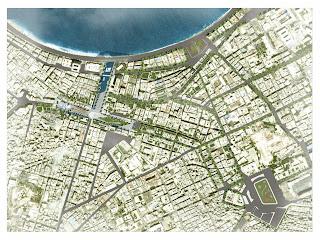 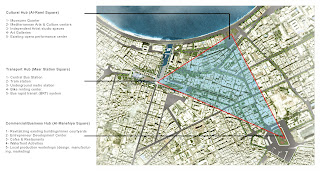 While the area surrounding Al-Raml square has been always identified as the central scene for cultural and tourist activity in Alexandria, the proposal builds on the existing situation and proposes a complete cultural district of museums, cultural centers, art galleries, along with the existing opera performance center. Turning this area into Alexandria’s new cultural district not only for artists, musicians, poets, but also for tourists will provide massive benefits for the city. Its location overlooking the Mediterranean exaggerates its uniqueness and its ability to attract normal citizens and not only the cultural elite. This will be based on renovating and re-using existing structures to house new functions.

In order to vitalize downtown Alexandria, it is necessary that it is very well connected to the rest of Alexandria’s districts. The proposed idea is to maintain a lot of the transport activity that is already occurring in the square and expanding it to accommodate public buses, tram station, underground metro station, and a new biking center. It is also proposed to add a bus rapid transit (BRT) system that connects downtown area with the rest of Alexandria. A great emphasis is made here on providing operational and well maintained transport systems to provide easy access and movement to and from downtown area.

As it is already considered the commercial and business district of Alexandria, it is proposed to organize, revitalize, and renovate the existing structures and promote a strong commercial activity within this district. Commercial activity not only provides citizens with their needs, or even provides continuous revenue for the city, but also promotes a strong tourist presence. This will only happen by renovating and revitalizing the existing buildings, and using them for diverse tourist and commercial activities such as cafes and restaurants within the inner courtyards. It is also proposed to promote within this district a strong direction towards locally producing certain products. Providing possibilities for clothes design, manufacturing, marketing and promotion with a trained team that offer professional guidance to young investors and shop owners are all part of the proposal as explained later. 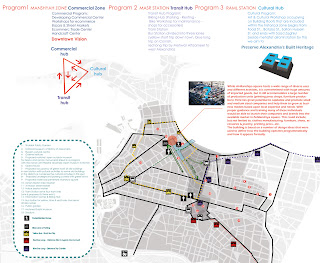 Major connectors are proposed between the three downtown hubs for both vehicular and pedestrian traffic. The three major streets of Saad Zaghlool, Fouad and Sherif Streets, and Al-nabi Danial street, all form possible connectors between the three nodes. As one moves from one node to the other through one of these streets the activity gradiently shifts between the two hubs.

In order to promote a more sustainable approach and to deal with the existing situation of downtown area, it is proposed to pedestrianize many of the areas within downtown district and use the full potential of the existing structure between 2012 and 2020. Using a long term plan to divert traffic and slowly transform the area into a pedestrian area will enrich downtown Alexandria, and will boost tourism. In the initial phase, parts of Manshiya square and some of the connectors to al-raml will be closed to vehicular traffic and only opened for pedestrian activity and shall remain well connected to public transport. Alternative routes are proposed for the diverted traffic network. 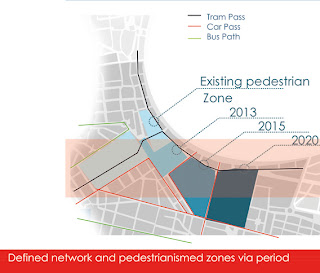 Downtown Alexandria is famous for its built heritage which is constantly under threat. Many of the district’s buildings have now been renovated, but some have been left to neglect, vandalism, and decay and are now in dire need for renovation and revitalization. The proposal suggests to renovate and re-occupy these buildings with activities similar to the existing ones (ex. local cafes) and proposes a renting model which ensures proper and enough maintenance is performed for the buildings. The proposal also suggests the appropriation and use of available rooftops which could become a strong facilitator and generator of urban development in such conditions. Using rooftops of existing buildings, whether in urban agriculture or as activity nodes, will be very useful for the district.

The basic idea of intervention within Al-Manshiya square is to intervene in a very minimal way with the goal of making the square perform much better than it is now. Dealing with the existing without radical change or evacuation of the surrounding fabric can be a very effective way to gradually implement change. Below are a list of the major ideas that were implemented in the square: 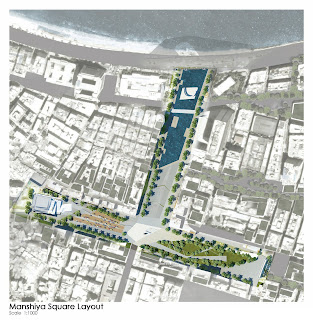 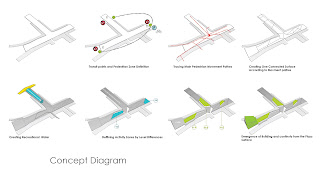 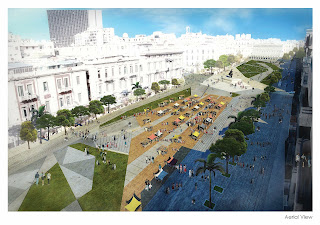 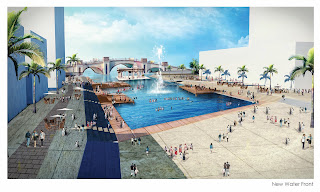 While Al-Manshiya square hosts a wide range of diverse uses and different activities, and is overwhelmed with huge amounts of imported goods, it still accommodates a large number of production units (printing press shops, furniture production). Here lies great potential to capitalize and promote small and medium sized companies and help them to grow as business models based upon local expertise and needs. With proper guidance and training many of these individuals would be able to launch their companies and brands into the available market in Al-Manshiya square. This could include, but not limited to, clothes manufacturing, furniture, shoes, accessories & jewellery, printing press…etc.

The building is based on a number of design ideas that were used to define how the building operates programmatically and how it appears formally. 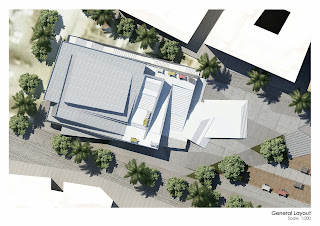 1- Connecting the building with the square and plaza.

This was achieved through linking the program of the building with the vendors activity and the commercial programs occurring in the plaza, and also through the formal language used to define the plaza and building together as one whole. This was also promoted by opening public spaces in the ground floor and providing connections between the two different sides of the project as a connection force. Large steps are added between the building and the square to provide pleasant sitting and picnic spaces, and which could also be used as open theatre for large performances. 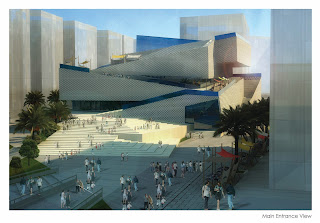 From the understanding that linearity and movement are two of the key factors of defining street commercial activity, the proposal aims to provide this linear promenade of street shopping within and on its façade. A continuous loop of movement (stairs and ramps) circulates around the building
giving it its unique gradient form. 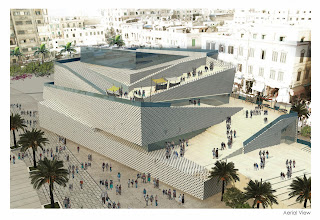 Hello, I wanted an email to contact you on I am a masters student and I needed some data about manshya thanks a lot

Here is the investors contact Email details,lfdsloans@outlook.com.  Or Whatsapp +1 989-394-3740 that helped me with loan of 90,000.00 Euros to startup my business and I'm very grateful,It was really hard on me here trying to make a way as a single mother things hasn't be easy with me but with the help of Le_Meridian put smile on my face as i watch my business growing stronger and expanding as well.I know you may surprise why me putting things like this here but i really have to express my gratitude so anyone seeking for financial help or going through hardship with there business or want to startup business project can see to this and have hope of getting out of the hardship..Thank You.